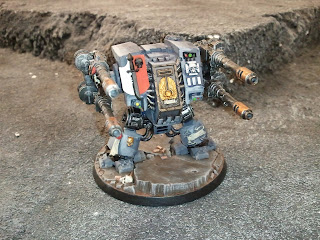 For a lot of people making the rifleman dreadnought is old news, and some of the conversions are very elaborate.  However, if you’ve never tried any conversion work or magnetizing, this one is really simple can be a great place to start.  Apologies for the paint job above.  It's not finished yet as you can see.  I'll come back an edit this post once I have a finished shot. OK, I stuck the old shot down the bottom.  Here's a new shot with something close to finished.

Firstly, why bother?  Rifleman dreadnoughts have been popular for a while.  A relentless gun platform dropping 4 48" range, S7 AP4 twin linked shots down the field.  What’s not to like.  Add the Grey Knight codex and those can become S8 so you can start glancing the armor 14 rolling your way.  The problem is, the only place to buy the guns necessary for this is Forgeworld, and they aren’t cheap.  You would be looking at $23 plus a lot of shipping for the Forgeworld option and it seems like they only have Mk IV right arms and Mk V left arms so they wouldn’t even match.

For this conversion I used an AOBR dreadnought, $20 in the consignment case at my FLGS, and the Aegis Defense Barrier kit, $22.50.  Yup, I paid retail when you can get it cheaper.  Support your FLGS, they are always a key part of your gaming community.  I also used 4 magnets, a craft knife and a modeling bone saw as well as plastic and super glue.

All you need to do for this is cut the studs off the side of the dreadnought and replace them with magnets.  Then, do the same on the autocannons from the Aegis kit.  Try and cut the studs as far back as you can so the arms don’t stick out too far.  Superglue magnets to the guns (make sure to check you’ve got the polarity right) and you are done.  Seriously, that is it.  Well you may want to dive through your bits box for a few purity seals or something, but really, job done.

There are many ways to improve this if you want to spend a bit more time.  If you are assembling the dreadnought one easy alternative is to put the magnets inside as they are strong enough to work through the plastic.  Another popular option is using plasticard to make some panels covering the back end of the guns, or even make a complete dreadnought style angled shoulder.  The other common direction for this conversion, if you have a full dreadnought kit, is to clean up the TL las cannon and missile launcher and attach autocannon barrels to them.  I’m not a big fan of that route though as you end up with mismatched arms, and lose the option to ever use those parts if you want to run a different dread build.

Lastly, as an added bonus, that Aegis defense kit has another great conversion bit in it.  The circular mount that the autocannons would have been on fits the back of a razorback.  You know, that razorback that has been stuck with the TL heavy bolters you glued on when you bought it.  Now you can go back through the bits box, find a lascannon and a couple of plasma cannons and make yourself the Las/TL Plas turret that is currently in vogue.  Of course the Aegis kit also had all the wall parts and some other nice bits that will make good scenery on your table.  Really a good value kit.

Hopefully this showed you how easy some conversions can be and will get you interested in some more advanced stuff.  At the least it helped you get a decent, but not in production unit on the table.  Something we often have to work around with GW. 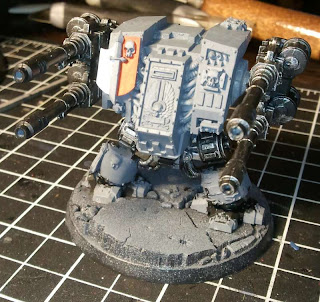 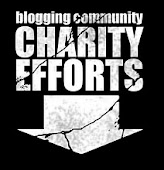